We all know the saying “fake it till you make it” and this is the concept behind laughter yoga, the newest and perhaps most unique form of relaxation out there. In a session of laughter yoga a group of yogis gather around to laugh at each other through some interesting  (aka weird) exercises in order to make you feel happy. No matter what the exercise, you have to force yourself to laugh (though the exercises should make you laugh themselves) in order for your body to perceive that you are calm and elated. Laughter yoga operates on the theory that fake laughter brings all of the beneficial effects of real laughter. According to the Laughter Yoga University (which I am sure is more accredited than Trump University):

“The concept of Laughter Yoga is based on a scientific fact that the body cannot differentiate between fake and real laughter. One gets the same physiological and psychological benefits.”

So what are the physiological and psychological benefits of laughter yoga? Scientists can agree on 5:

Well those all sound good to me, so I decided to try it out for myself. I decided to watch a laughter yoga video (there weren’t any classes in my area) and stumbled upon this gem on YouTube which you all can watch for yourselves.  The video depicts a training session held by Robert Rivest who is a certified laughter yoga instructor. 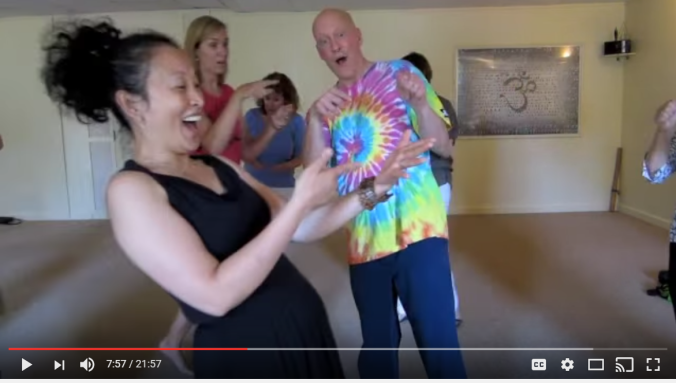 One of the exercises in Rivest’s video. Pointing you finger at your hand is one of the funniest things in the world in the context of laughter yoga.

The video itself lasts for about 22 minutes and details numerous exercises that are included in a laughter yoga session. The video begins with some standard yoga breathing exercises and then becomes something you have to see to believe. Though the video is punctuated with more breathing exercises, that is the only similarity to actual yoga. Instead of downward dog, there’s rowing laughter in which you sit in a boat and pretend to row. Instead of child’s pose, you actually act like a child playing on a merry-go-round. Here are some of the best, most absurd, exercises:

Throughout all of these exercises in order to get the group back to baseline Rivest make them chant “very good, very good, yay!” while clapping. There are literally no avenues in which you cannot be or feel happy in this program.

I was actually very surprised at how calm and relaxed I felt after completing the exercises. While laughter yoga focuses on utilizing fake laughter, I found myself genuinely laughing at how ridiculous every exercise was, but hey that’s the name of the game. It still makes me laugh just writing about it, which is a good sign.

When I first began watching the video and performing the yoga I had a mild headache which disappeared after a few minutes of laughter. By the end of all of the different laughs, I felt very peaceful which seems antithetical given that I had just forced myself to laugh and be hyper for the past twenty minutes.

The biggest surprise was that the end results felt a lot like actual yoga. You would think that meditative yoga would lead to different thoughts and feelings than laughing and acting ridiculous, but I found the two to be quite similar. Laughter yoga left me feeling just as relaxed as traditional yoga poses but without the shame of being inflexible.

On a side note, the yoga, in addition to its relaxing effect, made me feel a little sleepy. I would have hypothesized that the exercises would provide more energy due to all the laughter but it seems as if the relaxing effects were more prominent. It reminds me of how sleepy I get when watching late night comedy shows (team Coco all the way). Is there a deeper reason for the existence of late night?

Will it Work For Me?

If you take laughter yoga seriously (an oxymoron I know) then yes, you should feel the same results. Even if you go into it thinking that the exercises are flat out absurd you should still find yourself laughing along due to this absurdity. It is also true that laughter is contagious so if you practice laughter yoga in person with others you are sure to feed off of their energy and feel happiness without even trying. When Rivest asked the participants in the video how the yoga made them feel here are there responses:

I am sure that if you give laughter yoga a chance then you will feel some of these emotions as well.

What Does the Research Say?

Because laughter yoga is a relatively new practice, there have only been a handful of studies investigating the health benefits. One study out of Bangalore India found that participants of laughter yoga had a significant drop in heart rate, blood pressure, and cortisol (a stress hormone). They also found that positive emotions increased by 17% and negative emotions decreased by 27%. A study conducted in the United States also saw that self efficacy (the ability to organize and carry out actions) increased in participants of laughter yoga.

Laughter yoga may seem ridiculous, but it was designed to be this way. I am sure we can all attest to feeling better after a good chuckle, so why not try to recreate this feeling for a longer period of time? Trying out laughter yoga surely will not hurt you, but it can leave you with some good stories, and laughs, to tell your friends.

4 thoughts on “Try It Tuesday: Is Laughter Yoga the Best Medicine?”